Have you ever had a crafting day turn into an episode of The Twilight Zone?  You know what I’m talking about, right?  A day when things seem to be going right, but then all of a sudden disaster strikes and you’re not really sure how things went so wrong?  If not, consider yourself blessed and be happy I’m here today to share with you some value information on what not to do if you ever decide to make your own wax candles.

I had a craft day gone wrong recently.  Well, it was back in November actually, but I’m still suffering from it. Every day I walk into my kitchen and see what remains of the horrible mess I created with what I thought was a simple craft project, I feel a sense of failure.  That’s why it’s taken me so long to share this disaster with you.  This is the first time I had a project go really wrong, and although I can laugh about it now, my ego wound isn’t entirely healed yet.  But after talking to someone who had made the same mistake before with the same tragic result, I decided it was time to share my story and save you from making the same error.

I’m always up for a new craft project, so when a friend of mine handed down her candle making supplies, I couldn’t wait to give it a try!  My niece, Norah, was up for the challenge, too, and we decided to take this venture together one weekend.  We pulled out the tote full of candle supplies, and decided we’d do a trial run first before documenting our experience, which is why I don’t have many pictures.  We were so excited because one of the molds was for a Christmas tree candle, and couldn’t wait to get started.  If had known what was in store for us, we would have just watched The Sound of Music and ate popcorn instead.

Everything was going along fine to start with.  We melted the wax in a pot on the stove, threaded our wicks through the molds, added our scents and poured the wax into the molds.  We were making red candles first since red wax was already in the melting pot, but we had decided we wanted to make green candles next. There was a little bit of melted red wax left in the pot, and we were trying to figure out what to do with it when my husband walked in.

If this were a movie, this is where you’d hear the sound indicating impending doom!

Disclaimer:  I am not blaming what is about to happen on my husband, because when he came up with the idea, I actually thought it was a good one.

We had what we thought was an empty Diet Mountain Dew can sitting on the counter, so it seemed like a perfect way to discard the melted wax.  I mean, once it hardened all we’d have to do is throw it in the trash.

I placed the can in the sink and started pouring the wax into the can.  After I was done, I heard a bubbling sound coming from the can.  I asked my husband as we stood there over the sink listening to the noise, “You don’t think it’s going to explode do you?” Thank God, at that point all three of us stepped back a few steps, because that’s exactly what happened!  Wax exploded out of the tiny hole in the top of the drink can and covered so much area space in my kitchen I couldn’t believe it!  Ready to see the disaster?  It still makes me cringe to look at this picture! 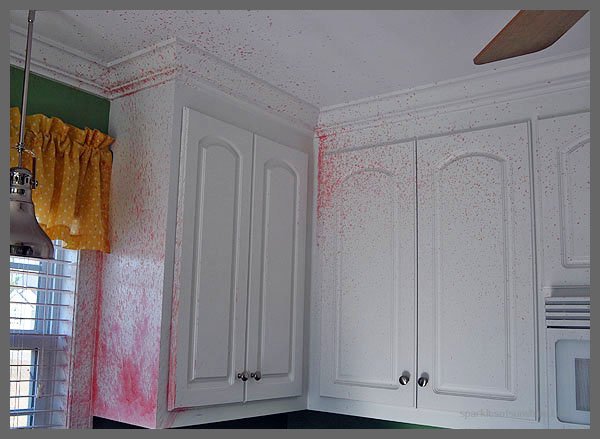 It was all over my kitchen cabinets, my fridge, microwave, sink and counter tops.  Droplets of wax covered my coffee pot and toaster.  Yes, there was wax all over my window and blinds, and even on the ceiling!  Not just wax, but red wax, which appeared pink.  Pink is normally my favorite color, but not when it’s spread all over my kitchen in the form of wax! 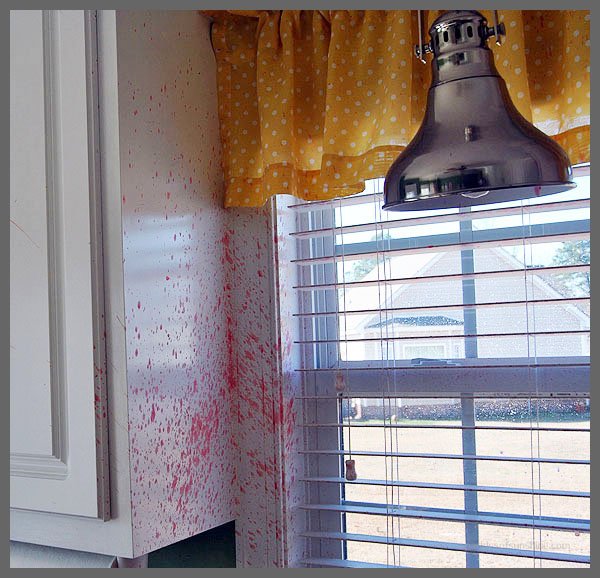 We immediately began our attempt at cleaning up the horrible mess.  Do you know how hard it is to remove dried wax off of something??  It took hours and hours of heating the wax with the hair dryer so we could wipe it off with a paper towel to get rid of the mess.  Unfortunately for us, we were unable to remove all traces of this disaster.  We were able to remove the wax, but the red dye from the wax left a stain, so we now have some painting to do to cover it up.  Yes, it’s a miracle I survived the busy holiday season with pink wax stains still on my kitchen ceiling and window trim!  I’m a perfectionist, so stuff like this normally drives me crazy! 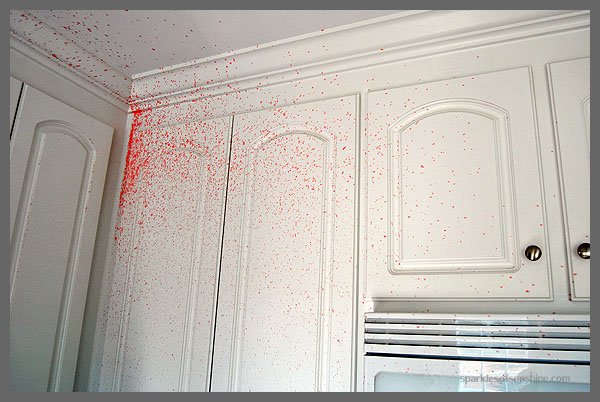 So, why did this happen?

At first, we assumed there must have been some trace of Diet Mountain Dew left in the can that had a chemical reaction with the hot wax.  But then we discussed our incident with someone who had the same thing happen to them when hot wax was mixed with water, we weren’t so sure.  I started doing some research online, and thanks to Wikipedia I finally found an answer.

When hot wax comes into contact with a cold liquid, it floats on top of the liquid.  The heat from the wax will cause the liquid to vaporize and turn into gas.  This causes the liquid’s volume to expand quickly, and explode outward, pushing the wax layer into the air along with it. (Wikipedia)  The same thing happens with a grease fire, which is why you aren’t supposed to use water to put it out!

So, there you have it.  Never, ever let hot wax come into contact with any liquid!  I hope you will learn from my mistake and remember this if you ever decide to make your own wax candles at home.  Will I ever decide to make candles again?  Well, the jury’s still out, but I do have two beautiful candles to remind me of the valuable lesson I learned that day. 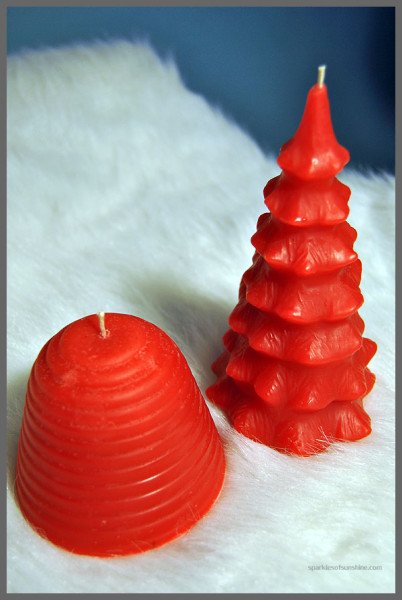