Have you ever found yourself saying yes to something when you really wanted to say no? Chances are you are nodding your head in agreement with me right now. Most of us have done this at least once if not many times in our lives. Why? Maybe we feel guilty and selfish for saying no to something, maybe we feel it’s expected of us, maybe we want to do it all but realize too late we can’t. In my case, it’s a combination of all of the above. Whatever your reason is for saying yes when you really mean no, it’s time to take a stand and learn the art of saying no. 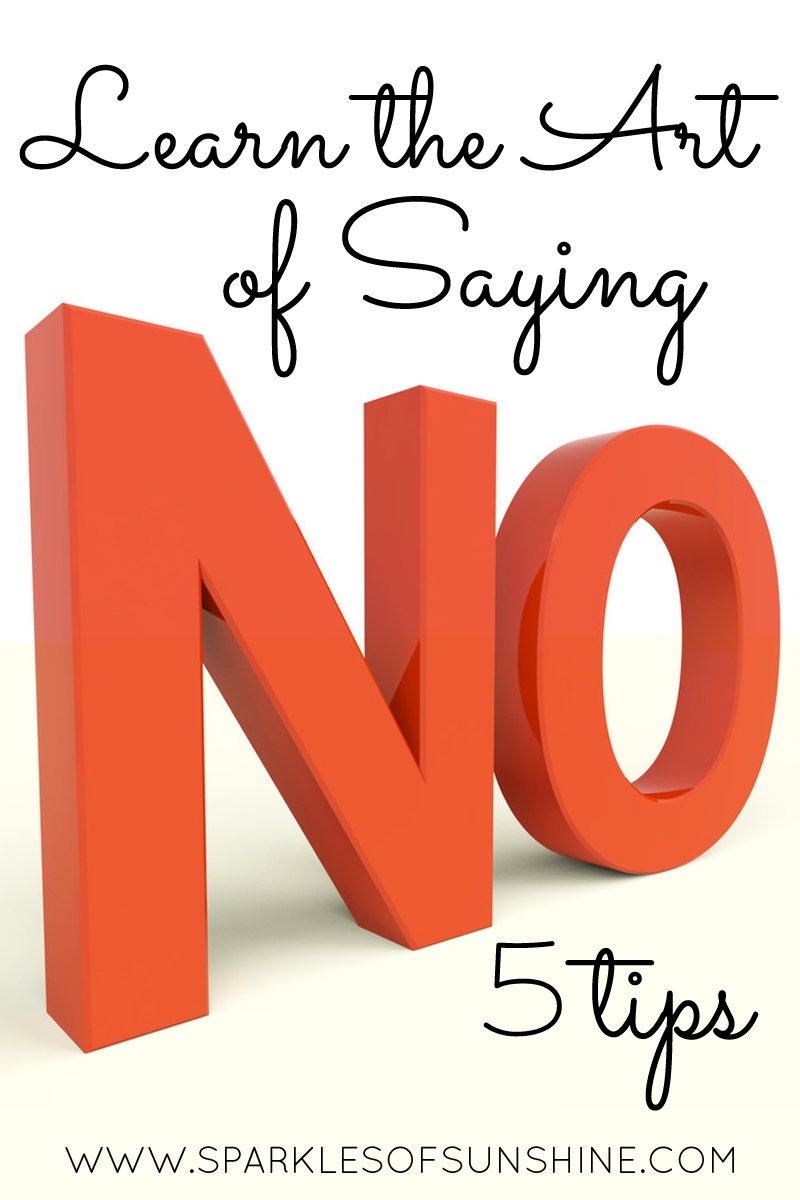 I’ve been known to take on too many commitments a few times in my life. OK…a lot of times. I’ve often found myself stressed to the max, eating a container of ice cream with tears streaming down my face because I had taken too much on my plate. It’s true that most of the time I want to do the things I’m saying yes to, but as much as I want to do it all, I simply can’t. I’m not Superwoman.

This year I decided to be more intentional about what I was saying yes to. I found myself over committed one time too many, and made it a quest to learn the art of saying no to things I wasn’t passionate about. I can’t tell you the freedom I have felt since I started saying no. I have more time to do things that really matter to me, and I no longer have to fight the clock for time for myself. My only regret is that I didn’t start doing this sooner!

Learn the Art of Saying No

So, are you feeling bogged down today by commitments and responsibilities that you know you should have said no to? There is no time like the present to learn the art of saying no. Here are some tips that will help you minimize the stress in your life by learning how to say no when you want to.

Don’t put it off.

In our effort to please others and avoid uncomfortable conflict, we often put off saying no. Like an ostrich, we put our head in the sand and hope the situation will go away. It rarely does, so if you know you should say no to something, don’t wait another moment. Go ahead and say no now. You’ll feel so much better once you do it.

Keep it simple and don’t beat around the bush when saying no. It’s best to be blunt and to the point so the person understands you are saying no. If you’re not direct you may give them the chance to talk you out of it and find yourself stuck in the situation. Be firm…you’ve gotten this far…you can do it!

Say no with kindness.

Always be kind when saying no. You may be tempted to say, “How could you even think I would have time to do this when you know how busy I am?” but don’t say it. It’s best to avoid any unnecessary conflict when saying no, so instead thank the person for the consideration and decline gracefully. Adding a little compliment will make it even harder for them to be upset with you for saying no.

You may be tempted to offer excuses for saying no, but remember that you don’t have to explain yourself. As long as you are saying no with a clear conscience, you are not responsible for providing reasons and explanations. Don’t go down that rabbit hole!

Be prepared to repeat yourself . Some people find it hard to take no as an answer, may try to persuade you otherwise or ask you to do something else you don’t want to do. Stand firm in your decision and tell them no again.

Following these tips will help you learn the art of saying no when you want to. The best true way to avoid this type of situation altogether is by not saying yes in the first place. In the future when someone asks you to do something, tell them you’ll think it over and get back with them. That way you can spend some time determining what your answer should be instead of giving them an answer you may regret later. You’ll feel more confident in your answer to their request after time spent in contemplation and prayer.